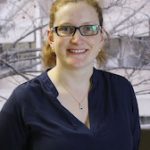 I’m a Senior Lecturer in the School of Mathematics and Statistics at the University of Melbourne.

My research focuses on mathematical biology in areas such as wound healing, tumour growth and epidemiology.